Hi Friends!   I didn’t think I was going to produce another CD album, but when I heard the recording of this live performance at the National Storytelling Festival it was such a hoot I just had to put it out. We’re having a performance and a CD release party at the Trade and Lore Coffeehouse in Asheville Wednesday May 17. Hope you can make it. 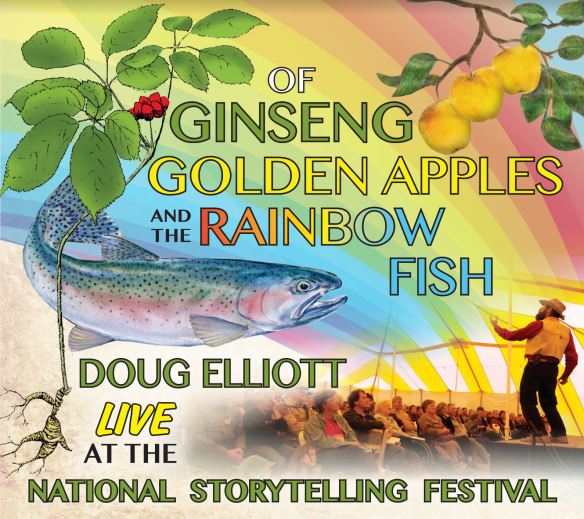 Doug Elliott visits Appalachian storyteller Ray Hicks, who is famous for his tales about the mythical folk hero Jack. Along with Jack’s exploits, Ray tells a few of his own hair-raising adventures, like when he was followed by a panther. He also recounts colorful folklore about the love life of ‘possums, bloodsucking owls, and tips for successful ‘seng hunting.

Driving home with his head full of wild tales, Elliott embarks on a true modern-day mythic journey where he catches a trout by hand; harvests wild apples, ginseng, and mushrooms; ponders Greek myths, Biblical verses, and the fungal web of life; meets three strangers; and finds himself living out his own folktale.

You’ll hear a poem by William Butler Yeats, quotes from the Roman poet Ovid, and a risqué herbal ballad by the great botanist Jim Duke. You’ll find out what happens when Artemis (aka Diana) gets caught skinny dipping and when Atalanta loses a foot race, as well as what happens when Jack leaves home to sell a cow and comes back with a rock. In this live recording of a standing ovation performance at the National Storytelling Festival, Elliott is accompanied by guitarist Keith Ward and his son Todd Elliott on fiddle.

Feel free to order the new CD and check out the products page of my website for the Spring Sale on my DVD.

Elliott performs a lively concert of tales, tunes, traditional lore, wild storie
s, and fact stranger than fiction–flavored with regional dialects, harmonica riffs, and belly laughs. One moment he is singing about catfish, the next he’s extolling the virtues of dandelions, or bursting forth with crow calls. He also demonstrates basketry, ponders the “nature” in human nature, tells wild snake tales, and jams and jives with his fiddler son, Todd.

Come visit my website to learn more about my work. I have wonderful books and CDs with stories about the natural world.
www.dougelliott.com

Hi folks, thanks for checking into my blog. I’ve got a lot of interesting adventures, storytelling concerts, and programs you might be interested in this year. Check out my PERFORMANCE CALENDAR for details of many public events.

Click to see Doug tell stories of the Poplar Tree