The chickens have been laying eggs among the hay bales in our shed. When we went to check for eggs one morning, we found a medium-sized black rat snake in the process of swallowing a large egg. Sometimes when this happens we indignantly take the egg away from the snake and carry the snake out to the garden and put it down a vole hole in hopes that it would devour some of those pestiferous rodents instead of our eggs. But this snake was not that large and her neck was stretched to the limit. She was working very hard to move the egg down her throat. I wanted to honor her efforts, so I didn’t disturb her. However, I didn’t want her to stay around the chicken nest and eat more eggs, so I decided to wait till she was finished swallowing the egg, and then take her to the garden.

While I was hanging out waiting for the snake to finish this laborious process, I was astounded to see another larger black rat snake slither into the scene! With no hesitation he crawled right on top of the first snake aligning his body with her every curve (including the grade A-sized lump in her throat). His belly started pulsing and caressing her with waves of undulations. Before long their cloacae pressed together and he inserted his slimy hemipenes. (Yep, like the opossum, he has a double ender.) It seemed that time stood still as they writhed lovingly together there in the hay. (All the while she was still trying to swallow her egg.)

Finally he accomplished what he had come to do, and with a few fond flickers of his tongue, he slithered off. (We caught him and took him out to the garden.) With him gone she could now focus on her egg. She finally maneuvered the egg down her throat about six inches. She curved her body with the lump of the egg in a sharp angle, and we heard the satisfying crunch of the egg crushing. (Check out the video.) In a few minutes, with the egg collapsed, you couldn’t even tell the snake had just eaten the egg. She had had quite a morning. I wonder which of her endeavors gave her more satisfaction. I’ve always heard that females are good at multi-tasking. Now I believe it!

Here’s a few second video of her cracking the egg.

And here’s an original tune from the Bound for Carolina album celebrating a big black snake:

Hi friends, I hope you enjoyed this snaky roll in the hay! I wish you good luck with your own multi-tasking (and your rolling in the hay)!

Feel free to check out the products page of my website for the Summer Sale.

An Evening with Doug Elliott DVD
Stories, Songs, and Lore Celebrating the Natural World
Elliott performs a lively concert of tales, tunes, traditional lore, wild stories, and fact stranger than fiction–flavored with regional dialects, harmonica riffs, and belly laughs. One moment he is singing about catfish, the next he’s extolling the virtues of dandelions, or bursting forth with crow calls. He also demonstrates basketry, ponders the “nature” in human nature, tells wild snake tales, and jams and jives with his fiddler son, Todd.
Normally $20 — NOW only $15
http://www.dougelliott.com/products.html

Bound for Carolina CD
A Musical Journey Celebrating the Plants, Animals and People of the Southeast
An All Music Recording featuring the original tune, Big Black Snake
From Oh Susanna to Old Joe Clark, from the crawdad hole to the railroad yard, Elliott wails on his harp and sings a collection of blues, contemporary, traditional, and old-time songs celebrating country life, the natural world, and especially the people, the plants, the critters, and the rich environment and culture of southeastern North America. Elliott is accompanied by fiddles, guitars, banjos, mandolins, bass, drums, buckets, bottles, rattlesnake rattles, frog croaks and even a few blue yodels. This all-music recording features seven newly recorded songs as well as 14 favorites from previous albums. Special guests on this project include, Phil and Gay Johnson, Billy Jonas,Wayne Erbsen, and Todd Elliott.
Featured tunes:
Oh Susanna • Froggie Went a’ Courting • Big Black Snake • Rattlesnaking Papa • Old Joe Clark • Strawberry Picking • Dandelions • Creasy Greens • Root Blues • Crawdad Hole • Mole in the Ground • Bullfrogs on Your Mind • Bulldog on the Bank • Cluck O’ Hen • Who Broke the Lock • Ain’t No Bugs on Me • Sail On Honeybee • Bile them Cabbage • Left Hind Leg of a Rabbit • West Virginia • All Around the Water Tank
Normally $15 — NOW only $10
http://www.dougelliott.com/products.html

Come visit my website to learn more about my work. I have wonderful books and CDs with stories about the natural world.
www.dougelliott.com

Hi folks, thanks for checking into my blog. I’ve got a lot of interesting adventures, storytelling concerts, and programs you might be interested in this year. Check out my PERFORMANCE CALENDAR for details of many public events. 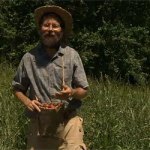 Click to see Doug tell stories of the Poplar Tree