They are out there now!  Beautiful green rosettes volunteering in a fallow section of our winter garden.  They might be  showing up in your neighborhood too!

Soft and easy, good and greasy! How I love them creasy greens!

I can remember hearing the famous urban wild plant forager Wildman Steve Brill (see note below) rhapsodizing about how he ate winter cress greens, not only as a nutritious steamed vegetable, but he also combined the greens with organic buckwheat flour and ran it through a pasta machine to make winter cress-buckwheat pasta.  He claimed that it was a perfect entree for a robust health food meal.

Another group of health food lovers, the Italians, are great appreciators of winter cress as well.  Euell Gibbons wrote that where he lived on the outskirts of Philadelphia, the first sign of spring was not the geese winging their way back north, nor the first robins on the lawn, but it was the Italians “swarming out from town to gather winter cress from fields and ditches.” They use the winter cress in salads, or cooked in soups, omelets, and other dishes. It is called “Barbarea” in Italian. “Barbarea” is also the Latin scientific name by which botanists refer to this group of land cresses. The winter cresses are so named because the greens in some areas are ready for the first picking on Saint Barbara’s Day which falls on the fourth day of December. There are three species of Barbarea commonly found in North America. Barbarea vulgaris, sometimes called yellow rocket. “Vulgaris,” here means “common” and it is the most abundant winter cress in northeastern North America.  Out west however, the native American winter cress, B. orthoceras, prevails. The third species, B. verna, grows wild in many parts of the southeastern U.S. and it is also cultivated in some areas. Sometimes it appears in markets as Dry Land or Belle Isle Cress.  Down South the plant is known universally as “creasy greens”. 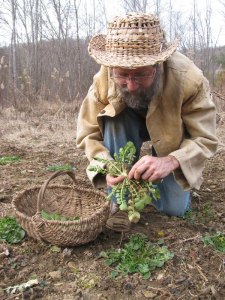 I can remember gathering a “mess” of the greens with my Appalachian mountaineer mentor and foraging buddy, Theron Edwards.  He was telling me to be sure to “look” the greens as I picked them.  I told him that I was looking at ‘em.

“I didn’t say look at ‘em,” he jovially scolded, “I said look ’em.” (By this, he meant to pick over each bunch of cress, removing all adhering dirt, debris and damaged leaves before I put them in our gathering bag. (This is good advice for harvesting any wild greens.)  We usually chop the greens and sauté them with olive oil and steam them nowadays, or more traditionally, boil them in a pot of salted water with a chunk of fatback or ham for seasoning. The well-cooked greens can be topped with a sprinkling of chopped raw onions or garlic powder and a few squirts of pepper vinegar. Traditionally they might be served with soup beans and a hot cat-head biscuit or a chunk of cornbread slathered with fresh homemade butter and a generous dab of sourwood honey or sorghum molasses. The highly nutritious liquid the greens were cooked in, known as “pot liquor,” is often drunk along with the meal.  After a meal like that I can assure you the humble weedy winter cress will take on a new dimension.

Perhaps a meal like that inspired the immortal Pegleg Sam Jackson to sing about them. The tune was recorded as “Greasy Greens” (Trix CD 3302) but when I heard him perform it back in 1977, the summer before he died, I’m sure I heard him say creasy greens. It has been said that the lyrics are full of double entendre, but I’m sure this can’t be true because Mr. Jackson didn’t speak French. To hear a bit of a spoken-word recipe and my rendition of the tune, click on the arrow below:

Here are the lyrics:

I’m a Mississippi Man from New Orleans.
Crazy ’bout them creasy greens,
If I don’t get ’em three times a day,
I’ll get mad and I’ll just walk away.

Honey, you can cook lima beans,
You can cook things, Sugar, I never seen,
But when you fix up your table for me,
Don’t cook nothing but creasy greens.

Honey, there’s some greens up on your shelf,
You must be saving them for somebody else!
I hear some greens falling in that pot.
How much creasy greens have you got?

Honey, I don’t care what your Momma don’t allow,
I want some good greens anyhow,
I’ll just eat ’em, Honey, and I’ll be gone,
She’ll never know we slipped them on!

Honey, that meat must’a been fat,
To make them greens so greasy like that!
Don’t cook nothing but naturally,
How I love them creasy greens.

Once after I was singing and talking about creasy greens, a ballad singer came up to me and said, “I know an old ballad about creasies.”  He informed me that the word “creasy” is a throwback to merry old England when the cress seller walked through the streets with a basket of cress shouting, “Creases! Creases!” as a street cry. Now in areas of the US that were originally settled by people from the British Isles, the name “creasies” has stuck and is still used today. Then he burst forth and sang this song:

I met a fair young damsel come skipping down the lane,
And her voice it was the clearest of any I did hear.
She had a bunch of early onions, some pickles and strong beer,
Small roses and a bunch of water creases.

I quickly step-ped up to her and unto her did say,
“I’m on my way to Cumberland. Can you direct my way?”
“Oh yes Sir, oh yes Sir,” quickly she did say.
“Take the turn at your left and go down the other way.”

We walked along together, together side by side,
And oft-times I wished she was my lawful wedded bride.
So I asked her this question, half in earnest, half in joke,
And these are the words that unto her I spoke,

“I’ve got cows, I’ve got sheep, I’ve got pigs and I’ve got geeses,
Likewise I’ve got a dairy full of buttermilk and cheeses.
If you’d consent to Mrs. now, fair lady of all leases,
We’ll spend our life in love, and water creases.”

“Since you have been so generous. I believe I may,
Prepare the matrimonials and then we’ll end the day.
I’ve a wedding dress to buy and some little bills to pay…”
I gave to her a sovereign, her debts for to defray.

T’was early the next morning, a letter I received,
“Kind sir, for disappointing you, I do apologize,
But when you pick a partner in a partnership for life,
Be sure you pick a maiden or a widow, not a wife!

I’ve a husband of my own and his name is William Grey,
And when I can well afford it, your sovereign back, I’ll pay,
To think that I would marry you upon the first of May,
You must have been greener than water creases!”

This hilarious old English ballad not only celebrates watercress, using the old English name “water creases”, but it also shows the dangers of getting carried away with your romantic fantasies. I wonder if that fellow ever got his sovereign back.  (A sovereign is a British gold coin worth one pound sterling.) 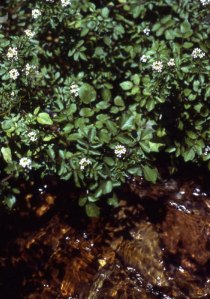 Lush bed of blooming watercress growing in a clear spring

Watercress is an aquatic member of the mustard family with a sharp, lively taste.  It is quite nutritious and can be used raw in salads and sandwiches, stir- fried with other vegetables, or cooked in soups and stews.

Watercress is a European plant but it has become naturalized in springs and clear streams (particularly in limestone areas) all over North America.  I have picked it in Maine, New Jersey, Colorado, Carolina, and California to name a few places.  One time I found so much watercress growing near the headwaters of a spring-fed river in Florida that I gathered a bushel of it and sold it to a health food store. Because watercress grows in springs with relatively constant temperatures it can be gathered when other fresh greens are not available. I can remember slogging through two feet of snow in a cold snap in northern Ohio when we came upon a spring full of lush green watercress. What a treat it was to nibble fresh wild greens on that snowy winter day.

Till the end of March I’ll sell the Crawdads, Doodlebugs, and Creasy Greens CD and the Bound for Carolina CD for only $10 each (That’s 1/3 off the normal $15 price). Both recordings have the Creasy Greens song and a whole lot more. And if you like, I’ll toss in the songbook (also entitled Crawdads, Doodlebugs, and Creasy Greens) with any order over $20. The songbook has even more Creasy lore! Check out my calendar. I’ll be doing a bunch of interesting programs around the country.

(Note) Brill is a wild plant enthusiast who does most of his foraging in New York City.  He received national attention in 1986 after he was arrested for eating a dandelion in Central Park.  The press had a field day: “The Man Who Ate Manhattan,” the Daily News headline read. “Daisies Not on New York Diet,” the Chicago Sun-Times quipped.  “Parks Muzzle Weed Maven,” exclaimed another.  The story did have a happy ending however when Brill ended up being hired as a park naturalist by the same agency that had him arrested.  He has authored several books including, Harvesting Edible and Medicinal Plants in Wild (and Not So Wild) Places.